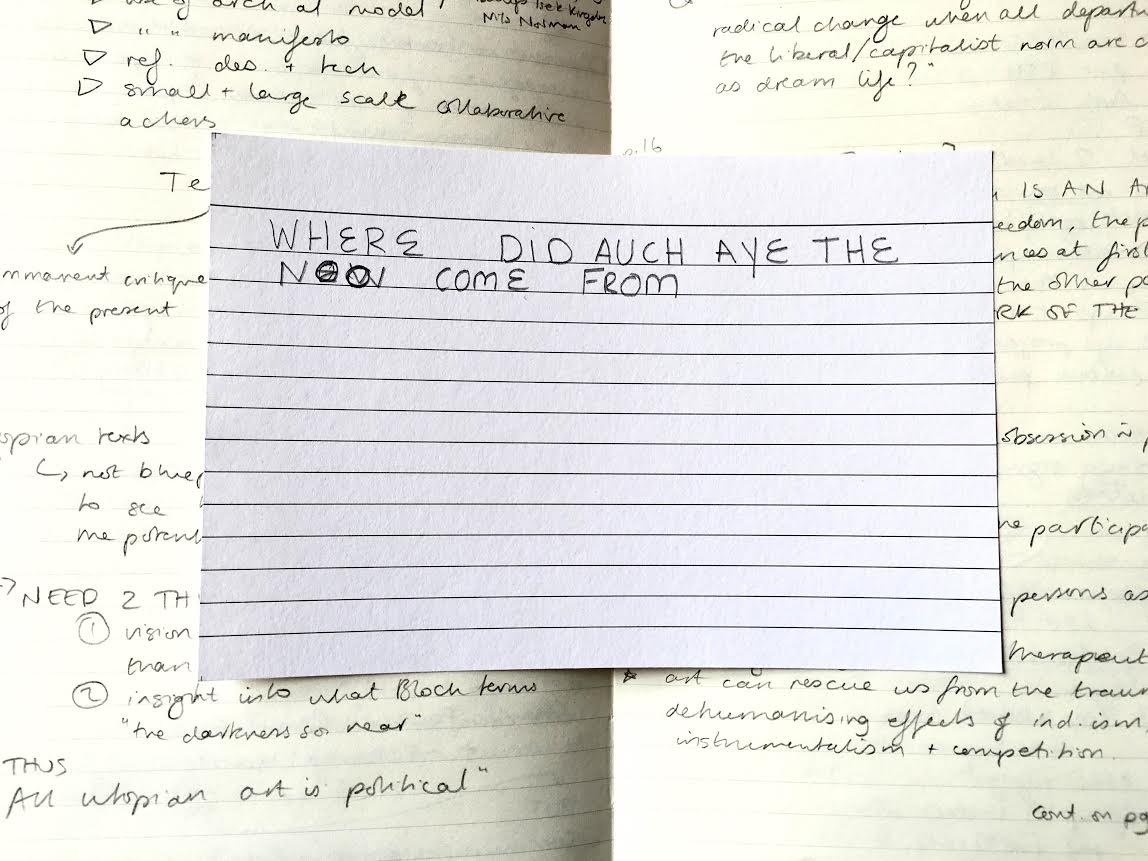 There is an easy answer to this and a hard answer. The easy answer is to translate all the bits and talk about where they come from. I’ll start with that.

‘Och’, or as the writer wrote, ‘auch’, is borrowed from Scottish Gaelic where it is an interjection expressing sorrow or regret. There a similar words in Dutch, Middle Low German, Middle High German and Russian. Good company. It’s first recorded in Scots in the 16th century in the writing of Gavin Douglas, who I spoke about a lot in a post recently. Och is also used in Scots to express dismissal (eg. ‘och away’). In the phrase ‘och aye’ it’s used as an intensifier.

The noo means just now, and has done since the 19th century. But it means ‘just now’ in the Scottish English sense of ‘right at this moment’ rather than the Standard English sense of ‘very recently’. This differentiation is one of the many linguistic differences that my Standard English speaking husband (who was brought up near Cambridge) and I still find that we have. My adult life has contained continual discoveries of words I use differently, and by the time I was 23 and Tommy and me got together I thought I’d found them all. But no. I expect I will write more about that in future posts. Look out for those!

So, we’ve done the easy part of the answer, what it means and where the bits come from. Now, why is this a phrase that folk know?

It does make sense as a phrase, but it doesn’t seem like a common one you would hear a lot. One attractive point for its repetition as a ‘stock Scots’ phrase, or maybe ‘stock Scotch’, is the unification of two characteristically Scots sounds – the ‘ch’ and the ‘oo’ sounds. It also has one of the best known Scots words outside Scotland: aye. Apart from the fact that it is ripe for success as a stereotype, I haven’t been able to find much about its origin. You can find details on equivalent phrases, like ‘it’s a braw, bricht, moonlicht nicht the nicht’ which seems to have come directly from the music hall singer and comic Harry Lauder. Michael, our Creative Learning leader on the tour, is of the feeling that it probably came from one of the English-written songs that tried ‘Scotch’ in the generation after Burns, when Scotland and the Scots were being Balmoraled. It has to me the whiff of something which has always been used comedically – it is not of the tragic Scots mould. I wouldn’t be surprised to find it on a delve into Glasgow University’s holdings on Harry Lauder. But maybe it’s much older.

If you have any information about this – let me know! I must discover the answer! Give me a tweet @ishbelmcf. Maybe we could have this interaction:

YOU: Would sometime soon be the most appropriate time to talk to you about the question on your blog?